What if Money Didn’t Matter?

6 Rules of Success by Arnold Schwarzenegger 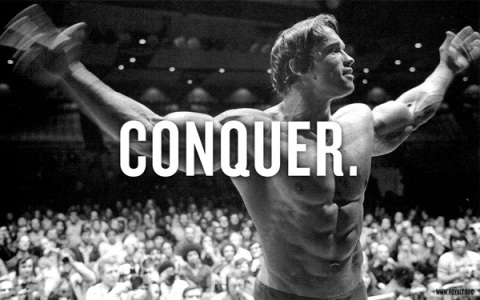 Many young people are getting so much advice from their parents and from their teachers and from everyone. But what is most important is that you have to dig deep down, dig deep down and ask yourselves, who do you want to be? Not what, but who. Figure out for yourselves what makes you happy, no matter how crazy it may sound to other people.

Break the rules, not the law, but break the rules. It is impossible to be a maverick or a true original if you’re too well behaved and don’t want to break the rules. You have to think outside the box. That’s what I believe. After all, what is the point of being on this earth if all you want to do is be liked by everyone and avoid trouble?

END_OF_DOCUMENT_TOKEN_TO_BE_REPLACED

1. You can really Lead Without a Title.

3. Give away what you most wish to receive.

4. The antidote to stagnation is innovation.

7. The bigger the dream, the more important to the team.

8. Visionaries see the “impossible” as the inevitable.

9. All great thinkers are initially ridiculed – and eventually revered.

10. The more you worry about being applauded by others and making money, the less you’ll focus on doing the great work that will generate applause. And make you money.

END_OF_DOCUMENT_TOKEN_TO_BE_REPLACED

The Law of Clarity

The Law of Clarity
By: Brian Tracy

Clarity accounts for probably 80% of success and happiness. Lack of clarity is probably more responsible for frustration and underachievement than any other single factor. That’s why we say that “Success is goals, and all else is commentary.” People with clear, written goals, accomplish far more in a shorter period of time than people without them could ever imagine. This is true everywhere and under all circumstances.

The Three Keys to High Achievement
You could even say that the three keys to high achievement are, “Clarity, Clarity, Clarity,” with regard to your goals. Your success in life will be largely determined by how clear you are about what it is you really, really want.

Write and Rewrite Your Goals
The more you write and rewrite your goals and the more you think about them, the clearer you will become about them. The clearer you are about what you want, the more likely you are to do more and more of the things that are consistent with achieving them. Meanwhile, you will do fewer and fewer of the things that don’t help to get the things you really want.
The Seven Step Process for Achieving Goals
Here, once more, is the simple, seven-step process that you can use to achieve your goals faster and easier than ever before.

END_OF_DOCUMENT_TOKEN_TO_BE_REPLACED

‘In the last century, big was better,’ said the China-based e-commerce company’s founder. ‘But in the 21st century, I believe small is beautiful because it is not about how much equipment you have, it is about how quickly you can change yourself to meet the market.’

from The Strait Times via Dennis

Don Miguel Ruiz’s book, The Four Agreements was published in 1997. For many, The Four Agreements is a life-changing book, whose ideas come from the ancient Toltec wisdom of the native people of Southern Mexico. The Toltec were ‘people of knowledge’ – scientists and artists who created a society to explore and conserve the traditional spiritual knowledge and practices of their ancestors. The Toltec viewed science and spirit as part of the same entity, believing that all energy – material or ethereal – is derived from and governed by the universe.

Don Miguel Ruiz, born and raised in rural Mexico, was brought up to follow his family’s Toltec ways by his mother, a Toltec faith healer, and grandfather, a Toltec ‘nagual’, a shaman. Despite this, Don Miguel decided to pursue a conventional education, which led him to qualify and practice for several years as a surgeon. Following a car crash, Don Miguel Ruiz reverted to his Toltec roots during the late 1970’s, first studying and learning in depth the Toltec ways, and then healing, teaching, lecturing and writing during the 1980’s and 90’s, when he wrote The Four Agreements (published in 1997), The Mastery of Love (1999), The Four Agreements Companion Book (2000), and Prayers (2001).

Don Miguel Ruiz survived a serious heart attack 2002, since when his teachings have been largely channeled through seminars and classes run by his followers, notably his sons Don Jose Luis and Don Miguel Ruiz Junior. Like many gurus and philosophical pioneers, Ruiz has to an extent packaged, promoted and commercialized his work, nevertheless the simplicity and elegance of his thinking remains a source of great enlightenment and aspiration. The simple ideas of The Four Agreements provide an inspirational code for life; a personal development model, and a template for personal development, behavior, communications and relationships.

Here is how Don Miguel Ruiz summarizes ‘The Four Agreements’:

END_OF_DOCUMENT_TOKEN_TO_BE_REPLACED

1. Remember that leadership isn’t about your position. It’s about your influence.

3. Lift people up versus tearing people down.

4. Protect your good name. An impeccable reputation takes a lifetime to build. And 60 seconds to lose.

5. Surround yourself with positive, ethical people who are committed to excellence.

6. Remember that even a 1% daily innovation rate amounts to at least a 100% rate of innovation in 100 days.

7. Believe in your dreams (even when others laugh at them).

8. Measure your success, not by your net worth but by your self worth (and how happy you feel).

9. Take an intelligent risk every 24 hours. No try-No Win.

10. Read “Buffett: The Making of an American Capitalist”.

12. Regardless of your title at work, be a team builder.

13. Remember that business is all about relationships and human connections.

END_OF_DOCUMENT_TOKEN_TO_BE_REPLACED

Leaders are made and not born. Leaders know who they are, understand their unique purpose, strengths and skills. They use who they are to bring their vision into the present.

Leaders live their vision. They become the change that they want to see in the world. They set the example and show the way.

Leaders incite conversation. Leadership is about making a difference and driving change which stimulates conversation and debate. The ideas that get talked about are the ones worth talking about.

Leaders understand that character matters. Character establishes the foundation for trust. Without trust you cannot lead.

Leaders invest in themselves. Leaders take care of their spiritual, emotional, mental and physical needs.

Leaders inspire. Leaders cannot achieve their visions alone. They inspire others to come alongside and participate in the journey.

Who Are the Millionaires

Who Are the Millionaires
By: Brian Tracy

The way you think about money will determine how much of it you accumulate more than any other factor. Your attitude toward money affects your emotions and your motivations.

The Five Ways to Become a Millionaire
If you are really serious about becoming wealthy, you will want to know the five main ways that fortunes are made in this country. Number one, top of the list, top of the hit parade throughout the history of America, is self-owned businesses. It is entrepreneurship of all kinds, including in real est ate. 74% of self-made millionaires in America, not only in this generation and in this century, but in the last century as well, come from self-owned businesses.

How Wealthy People Start Out
The great majority of wealthy people started businesses and built them from the ground up. In the 19th century, fortunes were built by people like Andrew Carnegie, Jacob van Astor, Thomas Edison, Commodore Vanderbilt, J. P. Morgan and others. In the 20th century, especially in the last few years, businesses and fortunes alike have been built by people like Bill Gates, Steve Case, Larry Ellison, Ross Perot and Sam Walton. Each of these people started with nothing and succeeded in building a business from scratch.

Most successful people can be characterized as having very high levels of energy. Since energy is the fuel with which everything is achieved, there seems to be a direct relationship between energy levels and levels of accomplishment. It is hard to imagine a tired, burned-out person achieving much in life. On the other hand, energetic, positive, forward-moving individuals seem to get and enjoy far more of the things life has to offer than does the average person.

Physical Energy is Basic
We have been led to believe that there is basically one kind of energy. We supposedly replenish this energy by sleeping at night, and during the day, we use it up again. It is as though we are machines powered by batteries, and each night we recharge our batteries for seven or eight hours. However, there are some problems with this view of energy. The biggest problem is that it does not deal with the fact that there are actually three different kinds of energy, each of which is necessary for maximum performance.

The three main forms are physical energy, emotional energy, and mental energy. Each of these energies is different, but they are interrelated, and they depend on each other.

The Sweat of Your Brow
Physical energy is raw energy, coarse energy, bulk energy, what we call “meat-and-potatoes” energy. Your physical energy is what you use to do physical labor. It is the primary energy applied by men and women who earn their livings by the sweat of their brow.

You are currently browsing entries tagged with Success at Opisina.